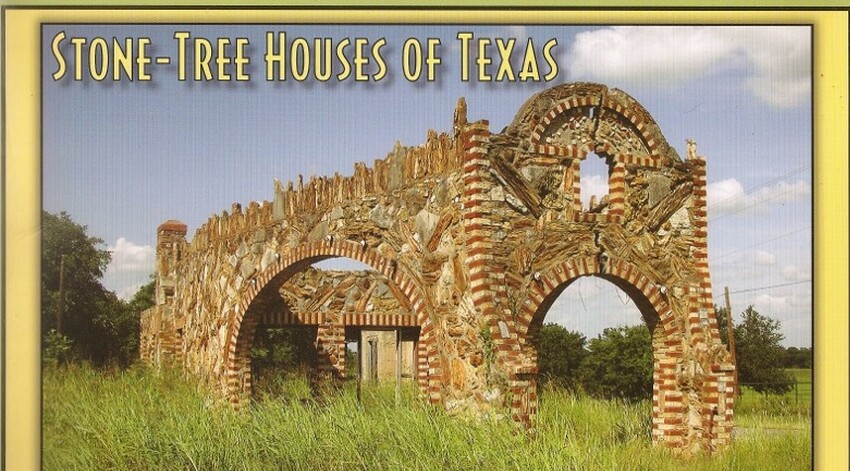 Fossil wood chimney at the Moore House near Acuff

This book is a gold mine for the discriminating,

in the built landscape. Charlie Garrett has left no

stone unturned in documenting the phenomena

and the tradition of building with stone and petrified

stone in Texas and beyond. This is by no means the end

of his research, just the first publication of his

"Sacred Spaces and Other Places"

"Stone-Tree Houses of Texas"  is one beautiful book. Even as a long-time rock collector here in
Texas, I was amazed to see how the abundant petrified wood native to Texas and the Southwest United States has been put to use. Having these houses highlighted in a book like this is a wonderful archive of Texas history and innovation. The book is full of fine photographs of the houses today and vintage photographs of the homes and their builders. "Stone-Tree Houses of Texas" includes a history of each house and how it is in use today. Some are still owned by the descendants of the people who built them. Some have undergone major transitions to new uses (check out Glen Rose). Regrettably, some also show the effects of neglect or abandonment. The designs and patterns crafted with petrified wood on the houses are often artful and ingenious. These are shown in crisp detail. The book will fascinate anyone with an interest in rocks, architecture, design, or just to see something 'really neat' that they may have never seen before. You'll want to look at it over and over again. Buy this book, so Mr. Garrett can get on with the next volume. I can't wait to see it. 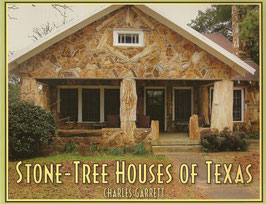 Available in hard-cover and

Charles Garrett is pleased to announce the publication of  his Stone-Tree Houses of Texas, a photographic survey exploring and documenting the use of petrified wood in Depression-era architecture in Texas.

Stone-Tree Houses of Texas is 269 pages with 70 full-page (12 x 8 1/2") and hundreds of smaller high-resolution color photographs taken by the author as well as hundreds of historic images and documents from the 1930s and '40s of fossil-wood structures. Appendices include descriptions of the regional geology and petrified wood by Houston geophysicist Scott Singleton.

Texas Books in Review | 9
Rock Solid
Stone-Tree Houses of Texas
by Charles Garrett
Spicewood, TX: Rockstone Press, 2012.
269 pp. $30 paper, $50 cloth.
Reviewed by
Gene Fowler
Who isn’t fascinated by wood that has turned to stone? Hopi Indians certainly were in the 1920s, when the Painted Desert Inn opened on Route 66 in Arizona. The Indians named the inn, constructed of locally-gathered petrified wood, the stone-tree house. Author Charles Garrett appropriated the name for the title of his attractive book about the use of petrified wood, minerals, uncommon rock formations, and fossils in the construction of homes and other structures in Texas in the 1930s.
Although some houses built with fossilized wood have been located in Oklahoma, Louisiana, and other states, Garrett notes that “all indications are that the epicenter of the phenomenon was in Texas.” His search to find, photograph, and document all the homes and other buildings in the book must surely have been an epic labor of love. Included are structures from all parts of the state, many in small towns that even the most determined Texas trekker might not have visited, such as Alanreed, Idalou, Castolon, Rising Star, Harper, Cooks Point, and Donna. Others, of course, are more on the beaten track, and a fair number are in large cities.
Divided into seven sections, the book covers petrified wood construction in the northwest, the west, the north central area, south central area, northeast, southeast, and far south. Each section begins with a brief report on the region’s geology by geologist Scott Singleton. While the reports are not “dumbed down,” they are nonetheless plainspoken enough to be instructive for the general reader.
Author Garrett documents the sites with color photography, vintage graphics and imagery, reprints of historic news clippings, and personal documents obtained from descendants of the original builders and/or homeowners. While the exteriors of many of the homes look similar from a distance, closer inspection of the book’s images reveal a one-of-a-kind look in each construction.
Some of the more accessible sites include the Petrified Wood Station and Texas Tourist Camp in Decatur, a gas station and tourist court built with petrified wood. In Bandera, the pleasingly eclectic Frontier Times Museum presents a mineral marvel in its construction. Begun by Western buff and writer J. Marvin Hunter in 1929, the museum’s exterior walls, as described in a historic news clipping, “are curious and odd formations of stone, stalactites and stalagmites from caves, fossils, petrified wood, crystallized and agatized formations, [and] vari-colored stones...” The museum’s interior also features a variety of geological curiosities.
At Matador, the red petrified wood used to construct the café, grocery, and garage at Bob’s Oil Well may have come from an area identified on old county maps as Mrs. Campbell’s Petrified Hill. Although closed for decades, the structures still stand, along with the oil derrick that attracted West Texas tourists in the 1930s and ’40s. The petrified wood that can still be seen in the entry gates to a 1931 planned community called Adams Gardens in Cameron County may have come from a “petrified forest” of fossilized oyster shells and trees near Roma in Starr County.
The geologic wonderland of Glen Rose qualifies as “The Petrified City” of Texas, and Garrett found the town’s stone-tree construction in sanitariums, homes, gas stations, car dealerships, civic buildings, and other structures. A star-shaped fountain made partly of petrified wood stands on the courthouse square near a bandstand that features a petrified knothole and other fossil wood, along with a Mesozoic-Era dinosaur track from the Paluxy River.
Several images document Sycamore Grove, just outside Glen Rose on the old road to Cleburne. Built in 1928 by stonemason Gran Norman, the structure is said to have housed a speakeasy during Prohibition and, at other times, a gas station, garage, and other businesses. “It was one of the few buildings constructed almost entirely of petrified wood and solid masonry,” writes Garrett. “Intricate inlays of large fossil logs and other architectural details attest to the mason’s artistry and skill.” Standing today in gorgeous ruin, the semi-fragile structure would make a great art gallery or other business with some restoration.
An informative appendix includes a listing of the current status and prospects for preservation of all sites in the book. Sadly, one of the best sites, Wolfe’s Nursery in Stephenville, is no more, replaced by a parking lot in the 1990s.
Gene Fowler wrote about the petrified wood structures of Glen Rose in his book, "Glen Rose, Texas," a collaboration with the Somervell County Historical Commission.

Charles Garrett’s lavish oversize photo book features two prominent Rockdale structures in tribute to petrified wood buildings. Reporter/Mike Brown When photographer-author Charles Garrett signed up late to be one of the featured speakers at Saturday’s seventh annual Tejas Fest in Rockdale, organizers hopes his appearance would be “set in stone.”

Af ter all, Tejas organizers thought popular ex-Texas Ranger Joaquin Jackson would be the “headliner.” But Jackson had to cancel due to a previously booked engagement he hadn’t known about.

They couldn’t have found a more rock-solid replacement than Garrett.

After all, his first book, published last year, is an exhaustive photographic survey on petrified wood structures in Texas.

In fact, “Stone Tree Houses of Texas” explores and documents the use of petrified wood in the Depression-era architecture of the lone star state.

The Fiesler home, later the Caffey home, is a landmark at the Murray-Bowser intersection. And it’s got two representatives of Rockdale among its hundreds of photographs.

He’s taking Jackson’s place as a speaker. For an updated list of speakers, and locations, see the box on page 1A.

“Stone Houses of Texas” has immediately become the definitive work on petrified wood structures in Texas.

It covers 80 sites with 70 full page and 363 smaller high-resolution photos.

It also includes reproductions of historic photographs along with numerous maps, charts and newspaper clippings.

LOCAL ICONS—Rockdale locations represented in the book are the Fiesler home, Murray at Bowser, and the Chamber of Commerce rock house at 1203 West Cameron.

Chamber of Commerce rock house was constructed of the abundant petrified wood once common in Rockdale area. The Fiesler house, known to later generations as the Charles and Neva Caffey home, marked the western edge of Rockdale in the 1920s and 1930s.

Garrett’s photos highlight several of the structure’s unique attributes, including its one-of-a-kind petrified wood doghouse. The Chamber office was constructed by legendary businessman H. H. Coffield and was the site of a unique “reunion” of sorts last year.

Last April, 97-year-old Robert Cummings of Georgetown, one of the two stone masons who crafted the home in 1937, returned to check out his work.

“Back then there was petrified wood all over Rockdale,” he recalled. “You could just go around and pick it up.”

The house was used as a residence for many years before becoming the Chamber’s office in 1995.

FIRST- OF-A-KIND—Garrett’s work has been hailed as a “first-of-a-kind” in Texas.

It’s the first known study of an architectural form which seems to date to a specific time and location.

Classified as folk art, petrified wood structures appear to be located almost exclusively within, or adjacent to, Texas and were constructed during the Depression.

“Most are relatively small private homes or businesses, some are public buildings, which were mostly Works Progress Administration (WPA) projects,” Garrett said.

There’s one advantage for anyone documenting the structures in the second decade of the 21st Century.

The material didn’t wear out, as did other building choices dating back to the 1930s.

“Many of them are still in use,” Garrett noted. That includes, of course, the two from Rockdale.

Garrett is a native of West Texas who moved to Austin in the 1960s.

He relocated to Lake Travis in the 1980s, were he worked in water utility operations and management.

Admission to Garrett’s speech, and all other Tejas events, is free.

By GLENN DROMGOOLE
For A-J Media

Author-photographer Charles Garrett, who lives outside of Austin, has produced a remarkable full-color coffee-table book on “Stone-Tree Houses of Texas” (Rockstone Press, $30 paperback).

“The intention of this book,” Garrett writes, “is to introduce readers to examples of a little known and largely unrecognized vernacular art form created mainly during the 1930s and mainly in Texas.”

The 80 sites include four in and around Lubbock: the Fisher/Hufstedler House, the Brunson House, the Moore House in Acuff, and the Knoles House in Idalou, as well as houses in Anton, Abernathy, Matador, Rotan and Snyder.

“Because of the amount of work involved,” Garrett says, “it is safe to say that those who built stone-tree houses very much wanted them.”

In his research, Garrett found the greatest concentration of stone-tree buildings in Fort Worth, San Angelo and Lubbock — only one in Houston, one in San Antonio, one in Austin and none in Dallas.

The book is arranged by geographical region in Texas. The northwestern, north-central and southeastern regions contain the most examples of stone-tree homes.

At the end of the book Garrett reviews the outlook for preservation or restoration of the various sites.